This part 2 of my look back at the process of rebuilding my LEGO town’s train station. In Part 1 we looked at the history of the station and the rebuilding of Platform 1. This time we’ll look at the tunnel area and some of the new features I added along the way.

The first step was to remove the old modules. You might remember I mentioned in Part 1 about the overhangs being a nightmare – you can see why here. This will just about stand up but the slightest touch tips it over – you can imagine how frustrating it was trying to squeeze everything into place without it all falling over and exploding. One of the old rock modules – top heavy is an understatement

Once they were all out of the way I had pretty much a blank canvas to start working on, and the first thing I did was lay down a bunch of baseplates. Cutting or painting LEGO pieces isn’t really my thing, but there’s two exceptions to that rule: baseplates and train track. I cut up a piece of straight track months ago to fill some odd-length gaps and I had to slice an 8×16 baseplate to fit around the supporting legs here. Laying down fresh foundations for the new tunnel. The cut baseplates are under the yellow 2×4 brick

The first thing I noticed here was just how much empty space there was to the left. I ended up filling some of that space with a hidden underground lab that no one will ever see, but that’s another post for another day. I started rebuilding the rock modules without the insane overhang, and with enough foresight this time to add space for cave entrances. I tried to keep everything as smooth and modular as possible, so it can in theory be taken apart fairly quickly. Rather than the massive unwieldy overhangs, these are made to look like rods have been driven into the rocks – I did a quick load test with some full battery boxes and it seemed to hold up pretty well. 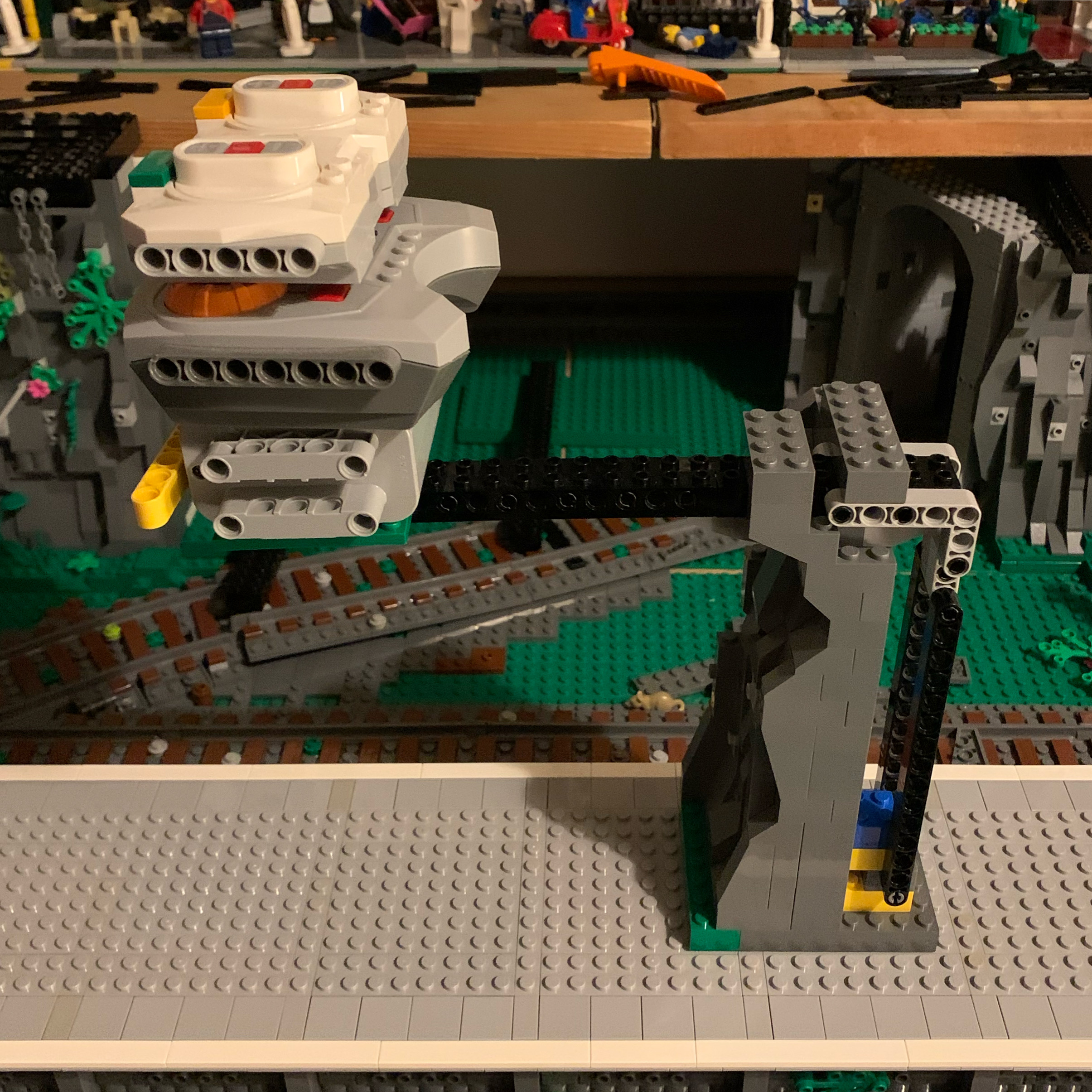 Testing the new rock modules. The black supports will hold the floating half of the road up eventually

I then got distracted for about a week building the aforementioned secret lab but once that was all done, it was time to slide everything back into position. The last piece of the puzzle once the caves and tunnel were in place was to rebuild the footbridge. The old bridge was kinda flimsy and really only added as an afterthought as access to Platform 1 used to be via a narrow set of stairs built into one of the rock modules. So I needed a new bridge to provide access to both platforms.

I ordered a bunch of parts I thought I’d need and waited for my parcels to arrive. The DBG stair pieces were the main thing I needed and once they turned up about a week later, everything else seemed to fall into place relatively quickly. Here’s a shot of the almost-finished bridge – I need to add some smaller details like handrails and the like but I’m pretty happy with the end result and it’s a big improvement on the old one. The new footbridge in position

That about wraps it up for this post. There’s a lot of stuff I’ve not covered: shop interiors, custom lighting, the secret lab, the basements, etc. I’ll try and cover more in future posts, but for more detailed updates, I post updates most days on my where you can follow along with the adventures of the construction crew.