← Catch up on Part I and Part II here

Welcome to Part III of this series of posts looking at the process of building up a LEGO mountain and castle.

Part II looked at building up a platform for a new tower. If you’ve followed my Instagram you will have seen the many adventures of Majisto. First released in the early 90’s, he was the first LEGO minifig to feature a beard piece and the first to wear the blue pointy hat. He’s surely up there with the classic space crew as one of the all time greatest figs and he’s been a staple on my layout pretty much since the beginning, taking on various roles of site inspector, lead guitarist and general nuisance. 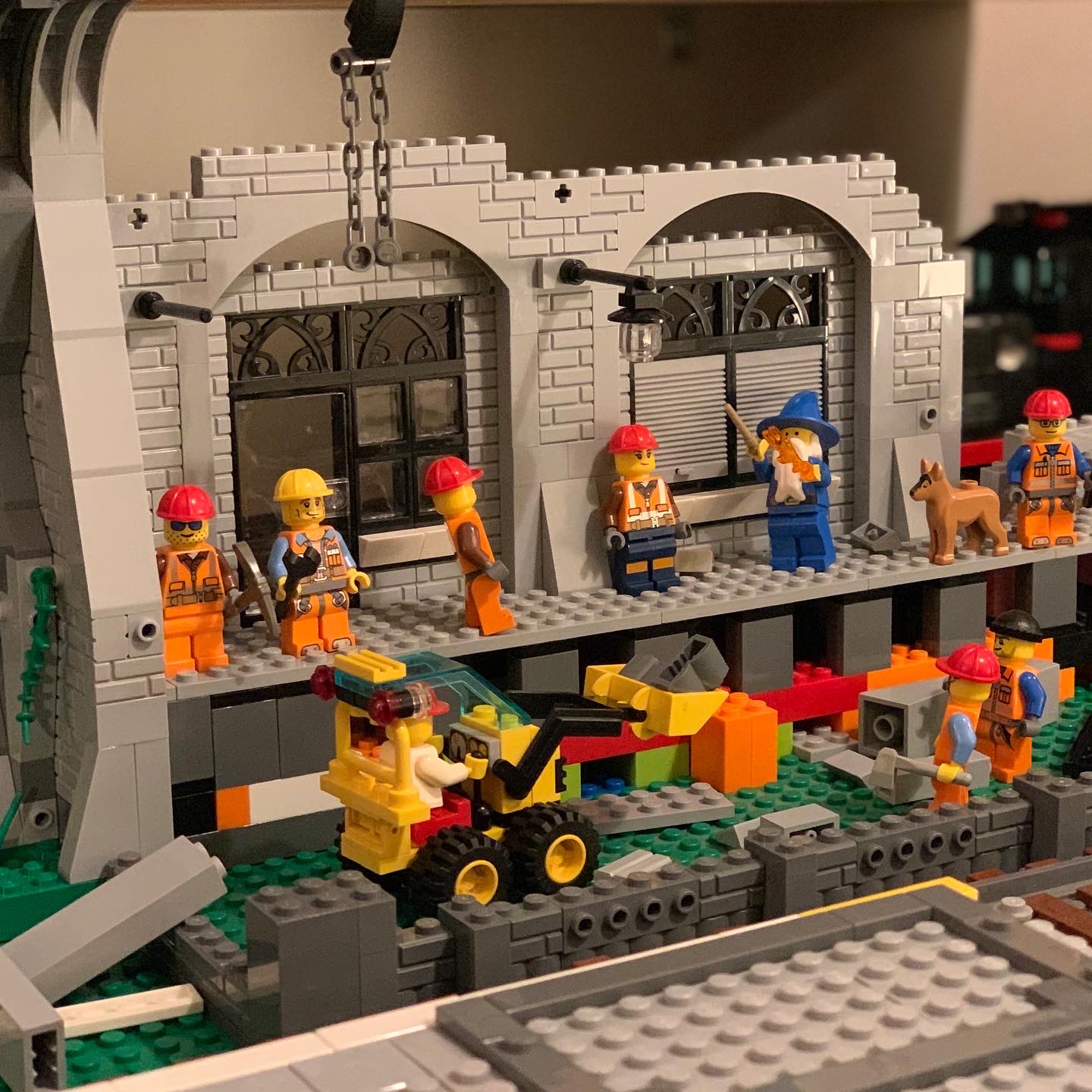 So with all that in mind… it was time to build him a house. The first rough version actually looked alright. I wasn’t too happy with the rectangular profile but it had the right imposing feel and gave me a decent sense of the scale of everything. But while this version made use of the LEGO stair pieces again, it was inevitably held back by the need for a landing at each turn. What I really needed was one continuous staircase running all the way from top to bottom… and the only way to do that is with a spiral. There is a LEGO spiral staircase system which it does look great when used properly. But this wasn’t an option for me as it was too wide. Some of the modular buildings make great use of the 1×5 rounded Technic plates for short, curved staircases but again, this was too big for what I needed. In the end, after trying a few options I settled on a a system of 1×4 edge plates connected by one stud at one end. This gave me enough flexibility to ensure I could clip the steps in at 90˚ increments, keeping it nicely secured inside the tower and reducing the chance of the whole thing imploding. Once I’d figured out that this was going to work, it was a rinse and repeat job all the way up the tower. I also made the decision to build a hinge into the base of one of the tower walls, which helped with the construction and also means that the work isn’t completely hidden from view. All this is fine, but the scene is only as good as its surroundings and the one thing that had been consistently bugging me for weeks was the backdrop. I am stuck with an enormous mirror that takes up most of the space behind the mountain, so had to come up with a creative solution to disguise it and get a proper backdrop installed. The problem was the height, and most off-the-shelf model railway backdrops seem to come in either 9 on 15in flavours. After a lot of searching and swerving several scam sites, I found a decent printer who could supply 24in x 10ft prints. As you can see, it’s not quite perfect. There is a gap at the top and the join between the two pieces is quite ugly. The seam was an intentional decision because I reversed the two 5ft segments, though there is a new piece arriving next week which should fix this issue. I can then fill in the sky area with some thin strips eventually, and any remaining gaps should be covered up nicely by the castle itself.

If you’re thinking of investing in a backdrop, I’d definitely recommend it. It adds so much depth to the scene and instantly transforms the entire layout.

Anyway — the next step was to work on the tower penthouse. I wanted to try something a bit different so I went for a wooden structure perched on top of the stone tower. Is there anything more satisfying than a snug fitting roof? Top of the tower taking shape

Over the coming weeks and months I will be starting to work on the castle itself, plus the rest of the small village and then eventually the interior of the mountain. There’s still loads to do but it’s already come a long way from the cluttered dumping ground of a few months ago.

Here’s one final shot of the new tower in position in front of the rolling forest. 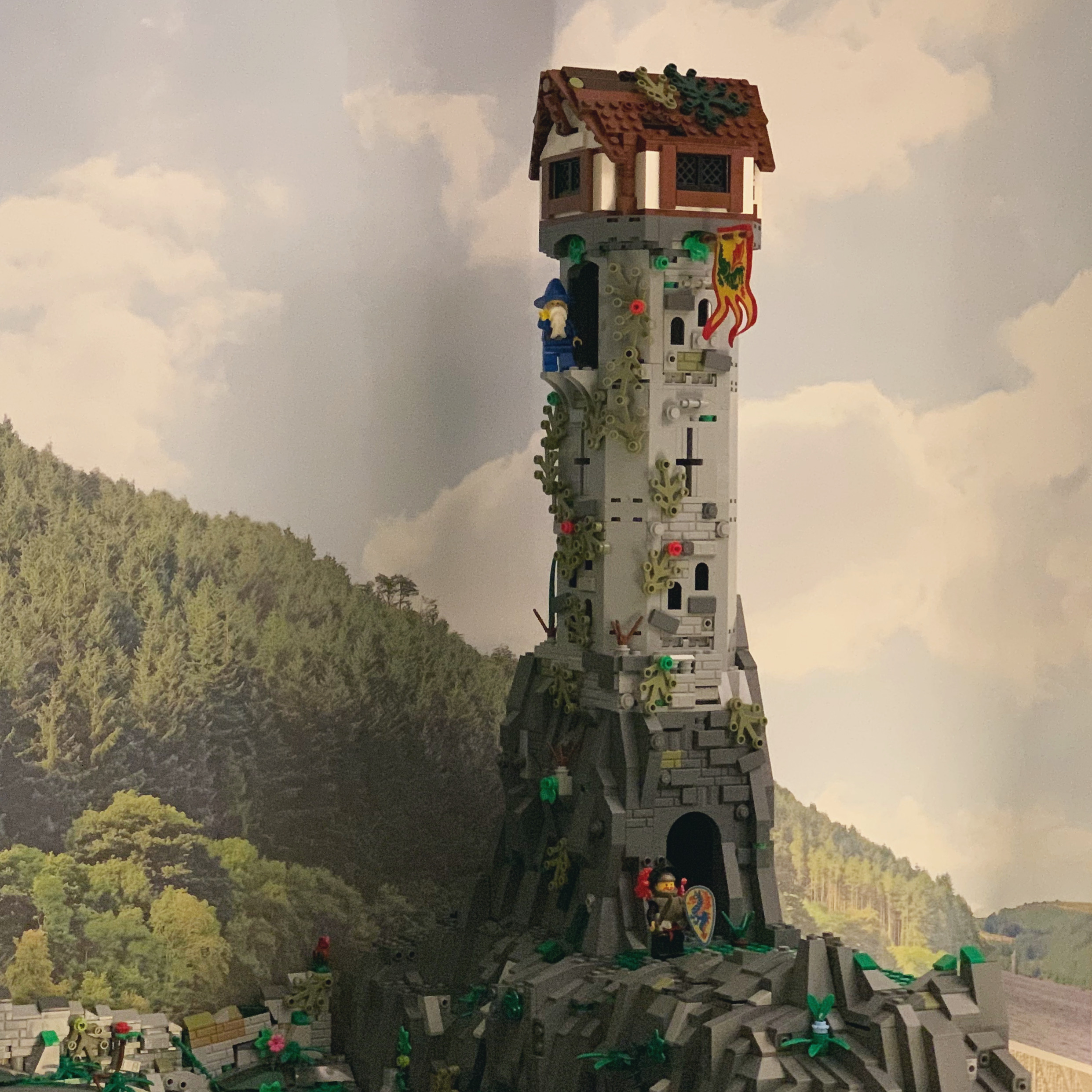 Is it cold up there?

Thanks again for reading.